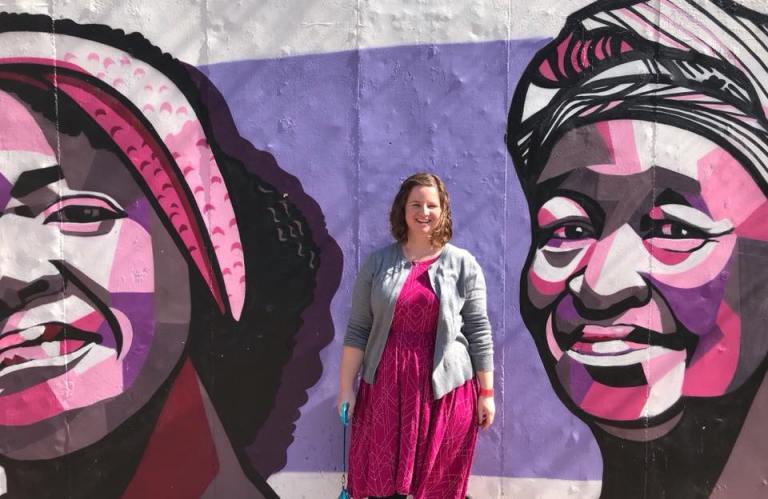 A few weeks ago, I boarded a flight from Atlanta, Georgia, USA, to Johannesburg, South Africa. I had been elected as a North Central Jurisdiction delegate to the 2018 Global Young People’s Convocation (GYPC). I was excited for a new adventure—and to put my law clerk responsibilities aside for a while.

During the GYPC, 331 United Methodist youth, adults who work with youth, and young adults spent time together in fellowship and worship. We met in small groups, attended workshops on some of the most important issues of our generation, played drums together, and visited important historical sites—like the Apartheid Museum and Constitution Hill—to learn about Nelson Mandela and South African history.  I was even asked to share a bit about asylum law during a Church & Society presentation.

My personal favorite part of the week was getting to know some pretty awesome people from around the world. We represented 40 countries and relied on interpreters because the conference was conducted in five languages: Russian, Portuguese, French, German, and English.  I learned about people’s experiences with and perspectives on things like Internally Displaced Persons camps, child soldiers in Uganda, refugees, the killing of albinos in Tanzania, ethnic tension in Nigeria, etc. I met teachers and social entrepreneurs and chaplains and pastors, young people who are doing some really cool things while in ministry with their communities.

Ultimately, we met as a legislative body to vote on a variety of the important issues that we had been discussing in small groups throughout our time together. (It wasn’t perfect; a lot of our dialogue and business followed western customs and norms.) As young people (if I recall correctly), we oppose child marriage; we support immigrants, including undocumented immigrants, asylees, internally displaced persons, and refugees; we call upon the Church to support and attract more young people; we oppose nationalism; we oppose sexism; and we call upon the Church to remain united.

The youth and young adult voting delegates had the opportunity to vote on the plans proposed by the Commission on a Way Forward: the Traditionalist, One Church, and Connectional Conference plans. We could vote for as many plans as we wanted, or we could abstain. This was the result of our vote:

I felt particularly invested in that vote because I feel called to social justice ministry, and, as such, I have tied my candidacy and ordination in the United Methodist Church with full LGBTQ+ inclusion.

During the week, I began to realize why human sexuality is so difficult to understand in non-western countries, when I had to explain “gender” to someone from Ukraine, and later when a Russian interpreter/translator asked me what “intercourse” meant. I learned that the Russian government could shut down the United Methodist Church in Russia if it supported homosexuality. I feel pretty attached to the Eastern Europeans now, and I don’t want that to happen. I knew that homosexuality is illegal in many parts of Africa and the world, but I think I now understand how serious that is—even though making homosexuality illegal is without a doubt a serious human rights violation. I also learned that people in the Philippines tend to be relatively affirming of LGBTQ+ people.

After my time at the GYPC, I think I can finally support the One Church Plan (rather than no plan at all), even though it merely removes the restrictive language and does not openly affirm LGBTQ+ people. During one of my most memorable moments at the GYPC, my small group and I were discussing LGBTQ+ issues. I said in my most assertive voice to someone from Ukraine: “You’re important to me, and the Russians are important to me, and the Africans are important to me—but in that same way, my friends who are gay and lesbian are important to me. If we, as young people, don’t do anything to address this issue, there will be no Church left.” (There is no language in Russian for the full LGBTQ+ spectrum, but I did my best to explain.) He listened. I explained that, for me, the human sexuality language in the Book of Discipline is blatantly discriminatory against LGBTQ+ people, and I can’t in good faith say I am called to social justice ministry if I don’t live that out by refusing ordination, until there is justice.

In Ukraine, he then explained, they don’t care much about feelings. (That is hard for me to understand because I’m an INFJ—a unicorn, according to some scholars—and I make most of my decisions based on how I feel, not on what I think. I understand the world through my feelings and intuition. I’m also more of an individualist than I’d like, having grown up in the United States. I care about how people feel because I care about how I feel.) My brother from Ukraine believes in a literal interpretation of the Bible and that the American church cares too much about protecting people’s feelings and is now “sick” as a result. I listened; I wanted to listen and to finally understand.

I’m not sure what will happen. I am certain of one thing though: Even if the Church as an institution is destroyed, my God will make something beautiful from the rubble.

I feel hopeful that it will not come to that.

P.S. I finished my term of service as a Global Mission Fellow US-2 Missionary in July 2017. I thought I’d revive my blog, at least for the purpose of this reflection. If you’re curious: I am now in law school and continue to pursue my call to social justice ministry.